Try to photograph a scene whose details captures some significant thing about that journey; significant for you, not just in general. For example, if it’s your route to the shops, and there’s a particular point at which you often stop to look at the sky, or where you tend to get lost in thought, or even where you tend to be wary of traffic. A scene that’s a visual prompt for some sort of mental activity. So that when you look at the photo, you’re reminded of whatever it is you tend to think about at that point.

We’re going to turn that photograph into a map, and transpose it onto a piece of open ground somewhere else, which you can then trace on foot, as a way of reflecting on the original scene and your mental state relating to that scene.

That’s a fairly self-contained project on its own, and we could just leave it at that, but the open ground will also have an influence, so we’ll be doing some other interventions along the superimposed route. Those interventions may be devised after having visited the open space.

What follows are some examples worked on computer, not yet on the ground.

This first example doesn’t quite follow the plan as set out above. What I’ve done here is to take a photo of a place, turn that photo into a map, then superimpose it on the same place, without having walked there. 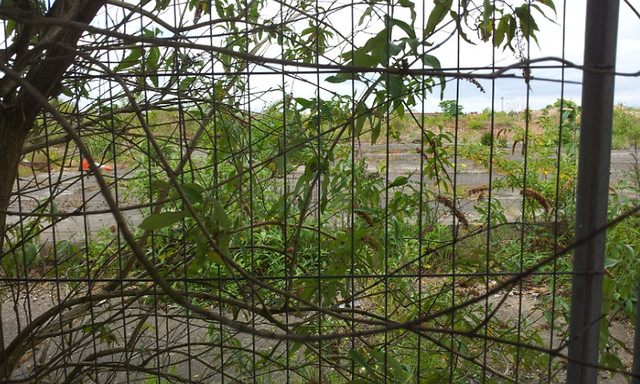 It’s a scene on Formans Road in east Birmingham, a very large area of demolition, once a Lucas industrial park (battery factory, headlamps, haulage). The factory was knocked down maybe ten years ago.

I stopped part way along the old frontage and took this photo through the Heras fencing so that I got a grid pattern as part of the scene. I converted the photo into a black & white line graphic. 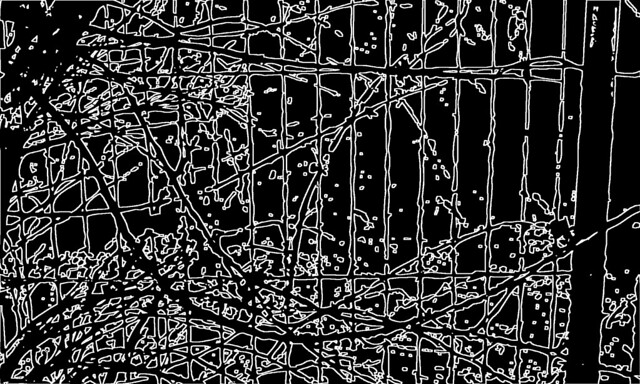 Then extracted the edges, converting them to GPS tracks. 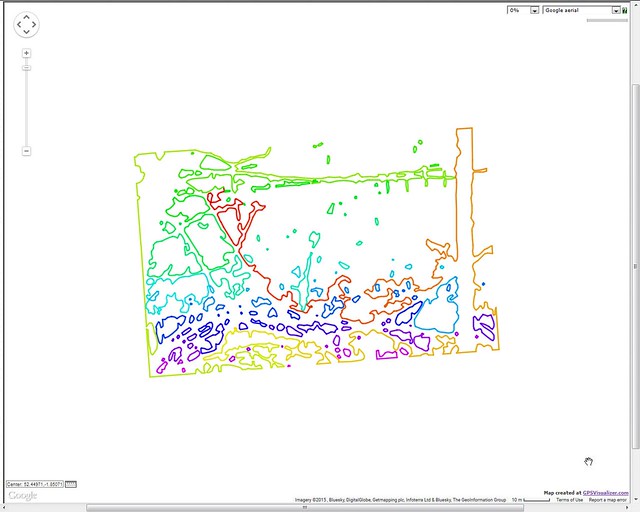 Which also facilitated filling the background with various colours, leaving a composition that’s both figurative and abstract. 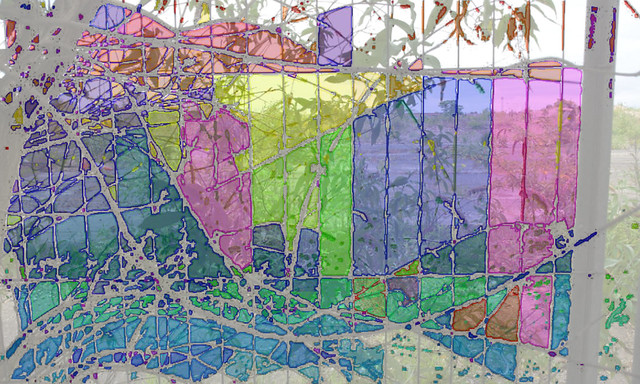 I can load that track onto my smartphone and trace the photo pattern onto the ground, garden plan-like. Not that I’d have the resources to carry it through. 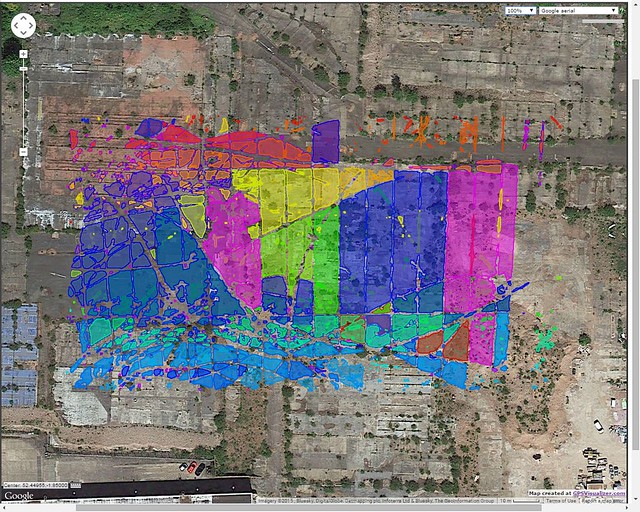 In effect, it’s like superimposing a photo on the ground, then walking around the outline of various parts.

It’s important to note that I could superimpose that new map anywhere, and retrace the fence scene in some other place. I’ve done a similar thing using a different scene superimposed on the Formans Road site. It’s from the cemetery at St. Mary’s church in Handsworth, next to Handsworth Park.

The scene as I photographed it. 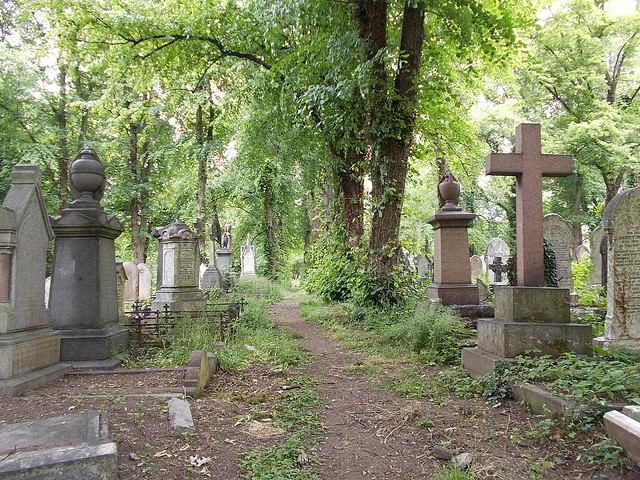 Then as manipulated to draw particular lines for emphasis. These are meant to evoke both the setting and the ideas prompted by being there. This has to be taken as an intermediate result, because the sense of a tree-lined path just about disappears. The abstraction is just too much. But with that in mind, the line drawing serves its purpose: to hint at the experience. 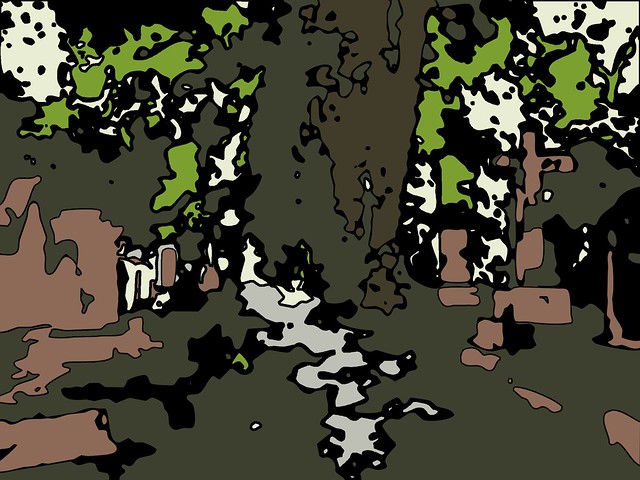 I’ve only been round there twice, but the place made an impression as a twilight zone of people & nature; life & death; dozens of large stone memorials completely untended, densely overgrown with ivy, grasses, woodland weeds, bramble and knotweed.

So here’s a garden plan that’s evocative of grandeur and neglect, and which prompts me to think about both that place and the wider ideas of people in nature, the futility of creating memorials only to abandon them a few decades later, and the ways people choose to mark their own existence. 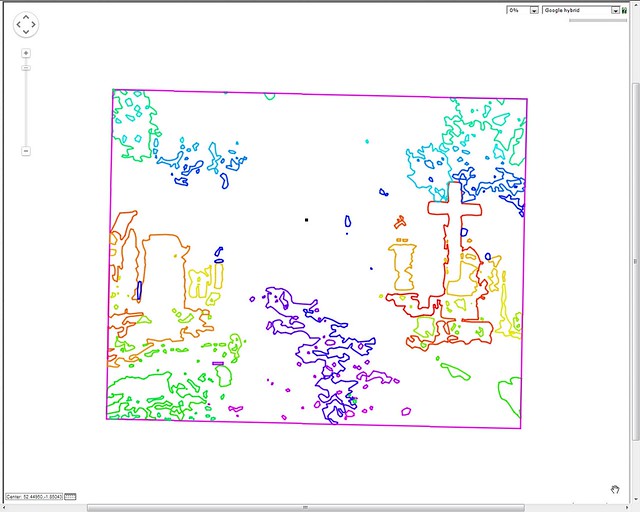 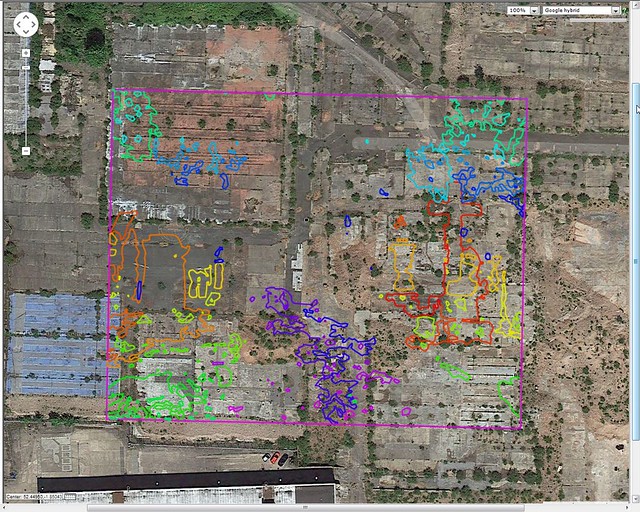 By mapping that photo onto open ground at Formans Road, and walking it, I create a space of reflection for myself, based on mapping one place onto another and re-mapping a mental space along with it. By  tracing the outline of the photograph onto derelict land at Formans Road, I am meditating on the cemetery while creating a new feature at Formans Road.

In tracing the transposed photo/map on foot, by walking the lines, I’m potentially creating a meditation circuit. Were I to walk that route often enough, the image would be outlined on the ground, and that place would take on its own significance as a walking memorial to the initial place where the photo was taken.

What’s odd and slightly entertaining about this is that we habitually walk in patterns, and do habitual things while walking those patterns. I might pace back and forth from my desk to my kitchen while thinking about work. I might potter about the garden, or go down to the shops. If I were to trace those patterns onto open ground somewhere else, I could essentially pay homage to my work habits. Or, let’s say I took a longer walk that I particularly enjoyed, and want to recreate it in miniature, so that I can revisit that mental space every so often. Maybe a beach walk from Bridlington to Flamborough.

Maybe I’d just retrace the entire route in miniature; that’s simple and effective, but perhaps there’s a favourite scene of a gully and stones on the beach. So, by tracing that scene onto ground elsewhere, I relive the moment of that scene, and create a trace of it here, where I live.

Not done yet. The open ground that receives a trace has its own character, and associations. So there’s a need to take those into account.There are various ways to work that into the project. One is to repeat the process, transposing the scene of the trace onto yet another site. Another is to respond to the open ground with further interventions. Maybe lay sticks, or leave markers. Maybe invite others to join in the walk, and ask them to tell stories about their own mental spaces and habitual routes. maybe intervene more emphatically by setting paths, sowing seeds, planting things. In a place like Formans Road, a wide chalk line would eventually show up on aerial photos, as would a cycle track or a pattern of plantings.

Conversely, one could trace the pattern of movement around the house, and map it onto a beach somewhere, then go to the beach, recreate one’s domestic movements precisely, and let the next tide wash them away.